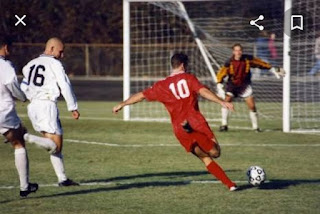 There are many kinds of games in our country, or all games, I like football most. It was first played in England. Now it is played in all countries of the world.

Football is my favourite game fe: because it has some special advantages. It is not as costly as cricket. It gives us much a delight.It is an exciting game. It et Soos thrills both the players and the spectators .

Football is an outdoor game. It requires big field. It is 120 yards long and 80 yards wide. There are two goal posts at each end. The game is played between two teams. Each team has eleven players. Of them one I Tere is goal keeper , two full backs, three half backs and five forwards. There is a referee to conduct the game.

At the beginning of the game the ball is placed at the center of the field. The referee a I whistles and the game begins. Then each team tries to pass the ball through the opposite goalpost. But they cannot touch the ball with hands. Only the goal keeper can touch and catch it. There is an interval of – 10 minutes. The sides are changed after the interval. The team which scores more goal wins the game.

The game of football teaches us obedience to rules. It also teaches discipline, co- operation and leadership.It improves the health of a player and makes him promt careful, strong and hardy.

Though, the game of football has some risk of being injured it is af liked by all.